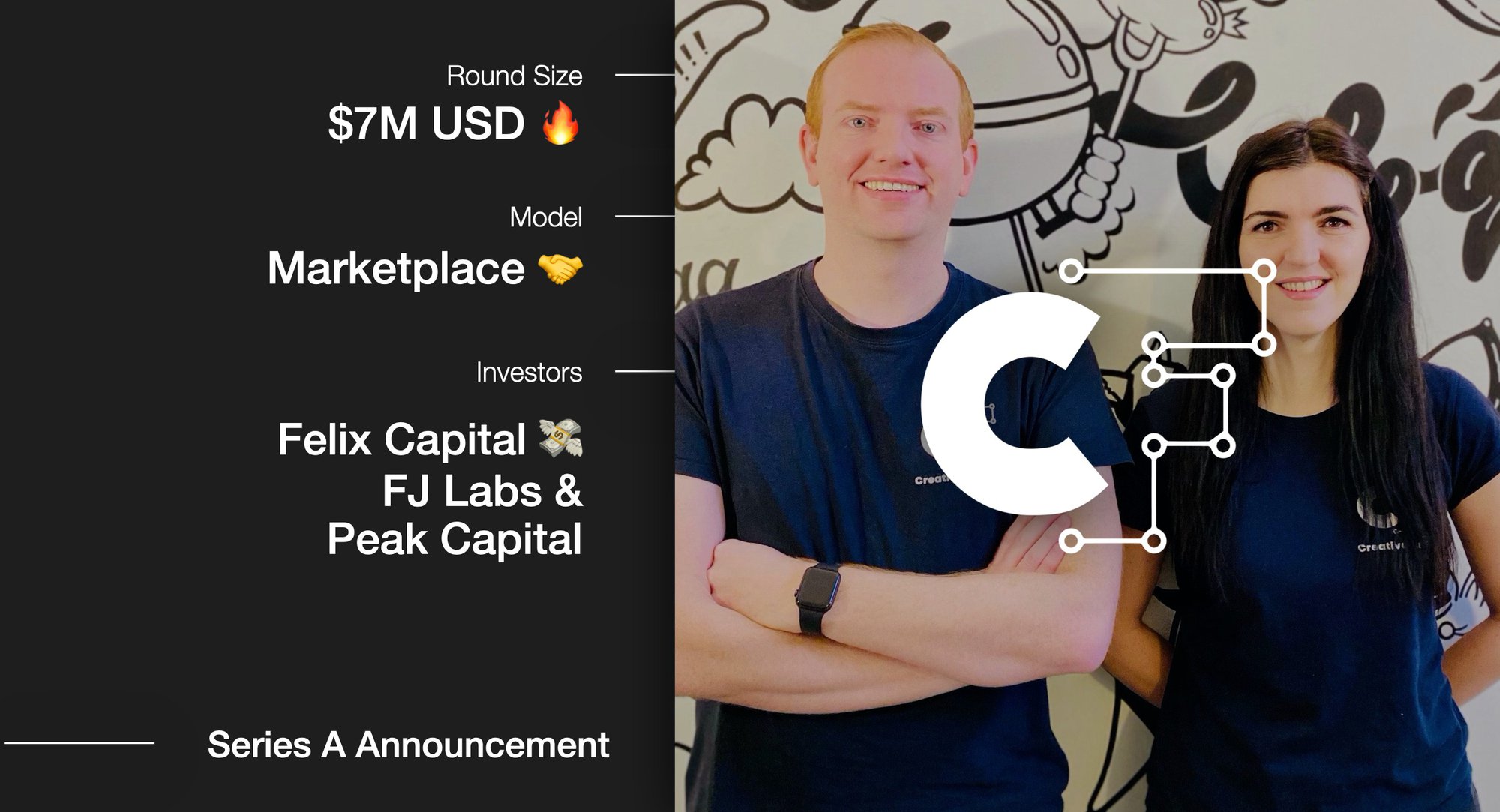 Amsterdam-based Creative Fabrica, a social marketplace for crafters, has raised $7M in Series A funding to offer more resources for its community of over 1 million creators.

The round is led by Felix Capital, joined by FJ labs with continued participation of Peak Capital. The funding will be used to launch new creator verticals such as yarning and kids crafts, grow the team with strong talent, and expand the company’s global footprint.

The startup was founded in 2016 by Anca Stefan and Roemie Hillenaar. Prior to, the pair led a digital agency, where they became intimately familiar with the pain of finding the right digital assets for projects. They launched Creative Fabrica to improve how digital assets are found and consumed, a status quo that the low-profile founders criticize modestly as, “ok, but not great”.

Although already in use by well over 1 million users and achieving sales from 175 countries last month alone, the Amsterdam-based company is still widely unknown in their native Netherlands. More than 60% of Creative Fabrica’s business comes from the US and another 20% from the UK, Canada, and Australia.

Creative Fabrica started as a marketplace for digital assets but now operates as a wider ecosystem of creatives and creators. At the platform’s core is a growing premium content marketplace of fonts and graphic assets. Beyond premium content, Creative Fabrica curates and tailors to the specific needs of its diverse audience with inspiration, resources, and tooling. Their audience has at their disposal assets and tooling across a spectrum of craft verticals, from mainstream (like print-on-demand and logos) to more niche verticals like embroidery design, home crafts, or quilting. With assets available across subject matters from wellness to steampunk, Creative Fabrica is an illustration of finding “riches in niches”.

A new corner of the Passion Economy

Creative Fabrica is situated at an important crossroad within the overarching Passion Economy. This emerging economy centers around the growing importance of self-expression. More and more, we identify ourselves by what we do and how we spend our time (Forbes). For some, this means making a livelihood from their side-hustle and creations on Passion Economy trailblazers like Etsy, Onlyfans, Substack, Twitch, or Patreon, to name a few. For others, self-expression means finding creative outlets away from the computer and the 9-to-5.

Frederic Court, Founder and Managing Partner at Felix Capital, notes that “the crafting and hobby market is still a developing market of the Passion Economy.” Court, whose firm Felix Capital focuses on investments at the intersection of creativity and technology, adds,

“in this economy, social influencers, podcasts, short-form video, and newsletters dominate the discussion. We’re excited about Creative Fabrica as the dark horse within the passion economy.”

Creative Fabrica creates opportunities for both those looking to create as a profession or hobby: they provide global reach and income streams for graphic designers on one hand, and on the other, a suite of resources for individuals to “be creative, stay authentic”, as the company’s website tagline reads. Court adds, “they are the hub for all people that want to create, either professionally or as a hobby, to share inspirational content and cooperate at an international scale.”

From Marketplace to Ecosystem

Stefan Bary, Managing Partner at Peak Capital, who also invested in this round, is excited about what’s next:

“It’s impressive to see how Creative Fabrica has evolved from a standard ‘two-sided marketplace’ to multi-sided ecosystem, fueled by a continuous circle of users inspiring others: a creator offers content to a user, who uses it and inspires another user (on another platform), who in turn inspires a creator, who makes new content for another user… that loop of influence and creation continues over and over again.”

What’s next for Creative Fabrica?

The company has experienced substantial growth since raising its first funding from Peak Capital 2 years ago. CEO Roemie Hillenaar reflects, “It’s been quite a ride growing from 6 people to our amazing team of 30 now – and we’re planning to triple our team this year. We have so much to build for our community that there is no time to waste.

With this $7M, we have the means to move faster and continue to bring inspiration and resources for all creators out there.

Creative Fabrica is a social marketplace for creatives. They service the growing market of people that thirst for creative outlets away from the computer. Their platform provides digital assets, tools, and inspiration for a global community of over 1M creatives – and growing. While headquartered in Amsterdam, the Netherlands, Creative Fabrica has deep roots in the US and monthly sales in over 170 countries.

They are supported by a diverse team of 30 and are looking for talent to join the ride. Do you want to help build the go-to platform for creative minds? Check out their open positions across development, product, marketing, community & content, HR, and operations. More information can be found on:

Felix Capital is a London-based venture capital firm for the Creative Class, operating at the intersection of technology and creativity. Felix focuses on digital lifestyle, investing in emerging digital consumer brands, and related enabling-technologies. The firm’s mission is to be a partner of choice for entrepreneurs with big ideas and help them build strong brands that stand out and move the world forward.

Since its launch in 2015, Felix has raised over $600m for early-stage and growth. Illustrative investments in Europe and North America include: Farfetch, an online marketplace for fashion and luxury; Mejuri, a modern jewellery brand; Moonbug, a media platform for kids; Papier, a personalized stationery brand; Mirakl, a Saas platform for Marketplaces; HungryPanda, a food delivery business for the Chinese community; and Peloton, a fitness technology and subscription service.

Peak Capital is a European investment fund based in Amsterdam, The Netherlands. Founded and funded by experienced entrepreneurs, Peak Capital offers venture capital to European fast-growing early-stage Marketplace, Platform, and SaaS companies. Peak Capital manages EUR 84 million and has made 28 investments and realized 9 exits to date including IENS, which was sold in 2014 to TripAdvisor (NASDAQ: TRIP), CheapCargo, which was purchased in 2016 by PostNL (AMS: PNL) and United Wardrobe which was acquired by Vinted in 2020. More information can be found on https://peak.capital